Some of our best sculptors have all but disappeared from our galleries and museums. Their successes have not so much destroyed them as derailed them, shunting their invention and production out of mainstream artistic discourse and into the realm of “public art” – a realm where imagination is challenged so formidably by exigency, and where responses to that challenge can be so handsomely rewarded, that the desolate struggles of the studio are all but left behind. Sooner or later, however, most of the sculptors who so intrigued us two or three decades ago, and whose success then attracted the attention of architects and consultants and cultural commissioners, return to the context of art itself, wanting to explore ideas and methods finally more appropriate to the intimacy of the studio than to the public arena. Many of these artists, we are gratified to find, are deft enough to maintain their involvement with the public sphere while scratching their experimental itch.

Lloyd Hamrol, for one, has returned to object-making even as he continues to evolve as a “public” sculptor...

My interest in sited work was an indirect outgrowth of my participation in “AutoBodies,” a performance event produced by Claes Oldenburg in Los Angeles, in 1964.  The public aspect of the work, as well as its temporality, challenged my understanding of the limits of art and granted me a passport to explore new territory.

I began to pursue situational installations and artist collaborations on temporary sited work while wrestling with the incongruities between place and object. By 1974, I had redirected my focus to permanent sited works in public places.

Since 1974, I have produced over thirty site-specific public works, primarily in outdoor settings. Many of my public commissions have offered the ideal circumstances for pursuing my interest in demystifying formal sculpture and creating a sense of place at a human scale. Most of these works mediate between architecture and the landscape and, without being specifically functional, establish a locus for audience interaction and play.  My work shares with architecture its capacity for shelter and intimacy, allowing it to engage the spectator in the participatory relationship essential to “complete the work.”

2011  It Happened at Pomona: Art at Pomona College 1969-1973, part of Pacific Standard Time, organized by the Getty Museum

1999  Radical Past: Contemporary Art and Music in

1985  The Artist as Social Designer, LACMA

I went from graduate school at UCLA in 1963, straight into Minimalism, Jack Kennedy's assassination (the prelude to Vietnam) and the intellectual seedbed of the feminist movement, which had a considerable impact on my philosophical outlook. By 1965 I was trying to integrate reductive structures, androgynous imagery and social utility, but never succeeded in getting more than two out of three together at any one time. Consequently, the work swung back and forth across an arc of interests defined on one end by discrete objects and on the other by transitory collaborative events.

Somewhere in the center of all this, as though in an effort to balance two extremes, I developed a body of static, architecturally defined installations which foretold, through materials and imagistic associations the permanent landscape site projects which were to manifest later, in the '70's and '80's. 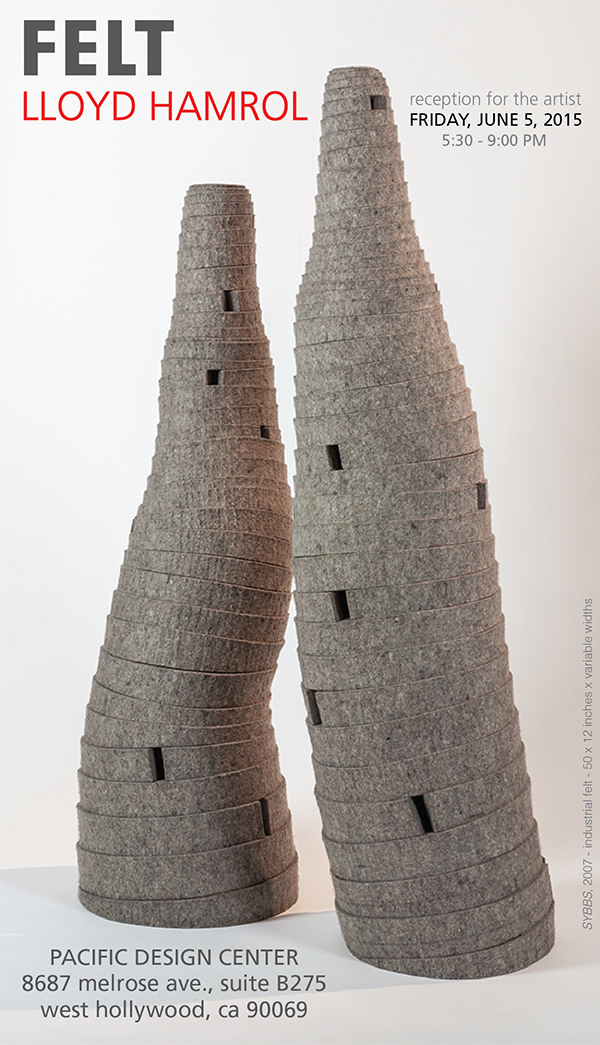 “…his purpose seems to be to sink his sculptures deeply into the quotidian, where its meaning rests in a Franciscan refusal to shine; it is with ostentatious modesty that he occupies space. A doorway in the rain, a park bench, or chess table under the trees, a grotto, these are the worldly analogues of his sculpture.

“Hamrol’s work belongs to the third phase of Earthworks. First is the period of theoretical formulation and expendable works (1968-69); second is the monumental on-site phase (1969-1973); and third, now, is the high access phase. This consists of works of various sizes but with a persistent connection to leisure and play… The later works are tender, not sublime; physical, not theoretical; inventive, not grand.”